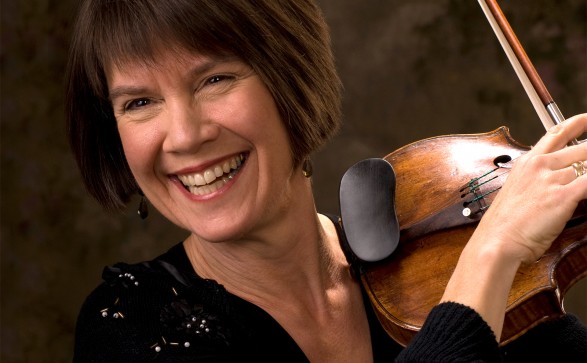 Violinist Ann Elliott-Goldschmid is a founding member of the renowned Lafayette String Quartet, Artists in Residence at the University of Victoria, Victoria, British Columbia.  A native of New Brunswick, Canada, she was greatly influenced by both of her parents, pianist Patricia Grant Lewis and composer and conductor, Carleton Elliott.  Early, formative studies were with Pauline Harborn, then later with Victor Yampolsky who remained her mentor until finishing her studies at Boston University.

Ann has been the recipient of many awards and scholarships; in her early years she was the star of the New Brunswick Music Festival and won the Canadian National Music Festival.  She was awarded a full scholarship to study at Boston University and was twice awarded the certificate for outstanding performer.  She was the winner of the BU Concerto Competition and was active in the concertizing scene of Boston while still a student there.  She was the first violinist of the Honors String Quartet, working closely with Eugene Lehner and Endel Kalam.  For two summers she was awarded scholarships to study in Zurich, Switzerland with Nathan Milstein and in Ammerland, Germany with Denes Zsigmondy.  She was a full-time member of the Emanuel Chamber Players and the Harvard Chamber Orchestra and was in demand as a free-lance musician.

In 1984 she accepted the position as assistant concertmaster of the newly formed Renaissance City Chamber Players in Detroit and it was there that she met her colleagues in the Lafayette String Quartet.  After leaving the Chamber Orchestra, Ann taught violin and chamber music at the Center for Creative Studies, the Rochester Conservatory of Music and at Oakland University where the members of the Lafayette Quartet were in residence.  She gave numerous recitals in the Detroit area primarily collaborating with pianists Flavio Varani and Dati Mehta.

Though working together beforehand, it was in July of 1986 that the Lafayette String Quartet’s career was officially launched.  That same year the LSQ won the Cleveland Quartet Competition resulting in two years of study with members of the Cleveland Quartet at the Eastman School of Music.  Ann studied with Donald Weilerstein both as a soloist and as a chamber musician.  Charlie Castleman and Lynn Blakesly were also wonderful influences.

Until his untimely death in December of 1997, Rostislav Dubinsky, primarius of the Borodin Quartet, remained the musical father of the LSQ.  His dedication to them and loving encouragement, enabled the LSQ to continue working together as the same foursome for over 30 years, a feat no other all-female quartet has ever managed.

Active in the music scene of Victoria and abroad, Ann served as concertmaster of the Galiano Ensemble, and is a huge advocate for Strings in the public schools.  Along with her colleague Pamela Highbaugh Aloni, she conceived of and team-teaches the Strings Mentoring program at UVic.  She has performed for the Olympic Music and Eine Kleine Summer Festivals, and has been an instructor for the CYMC, the National Youth Orchestra of Canada, and the Egmont Summer Music Festival.  She is in great demand as a violin and chamber music coach and adjudicator.

Ann has recorded for CBC radio both as a soloist and with the Lafayette String Quartet.  Along with LSQ discs, Ann and her mother recorded Murray Adaskin’s first Sonata for Violin and Piano (AdLar), she has recorded “Cluck Old Hen” variations by David Jaffe, and Beethoven string trios arranged for guitar with colleagues Alex Dunn, guitar, Lanny Pollet, flute and Joanna Hood, viola. She performed the Brahms Double Concerto with the Sooke Philharmonic and the West Coast Symphony Orchestra with her colleague Pamela Highbaugh Aloni.

Ann is an avid, but amateur, horsewoman and is the mother of Ella and Abby Goldschmid.